Claviculoplasty - Replacement of the Collar Bone

The world's first claviculoplasty was performed in May 2003. The work to develop the implants used was a collaboration between Ellis Developments, Pearsalls, Biomet and Surgicraft. The surgeon was Prof. W Angus Wallace at Nottingham City Hospital. This page tells of the contribution of all those involved.

Before the operation the right hand side clavicle can be clearly seen on this x-ray, and below that the post-operative x-ray clearly shows the titanium implant. 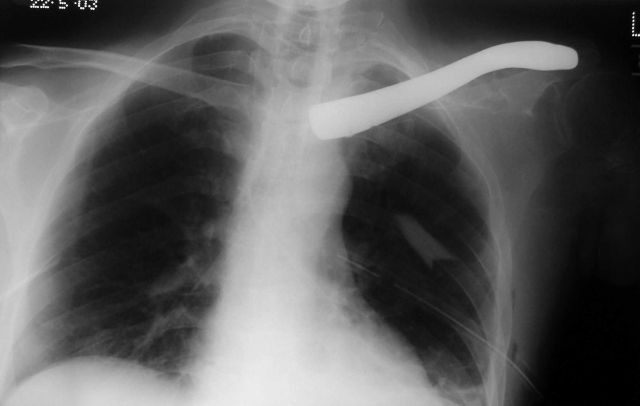 The following picture demonstrates how the implant was attached with artificial textile ligaments, the one on the outer end made by Surgicraft and the inner (medial) end custom designed by Ellis Developments and manufactured by Pearsalls. 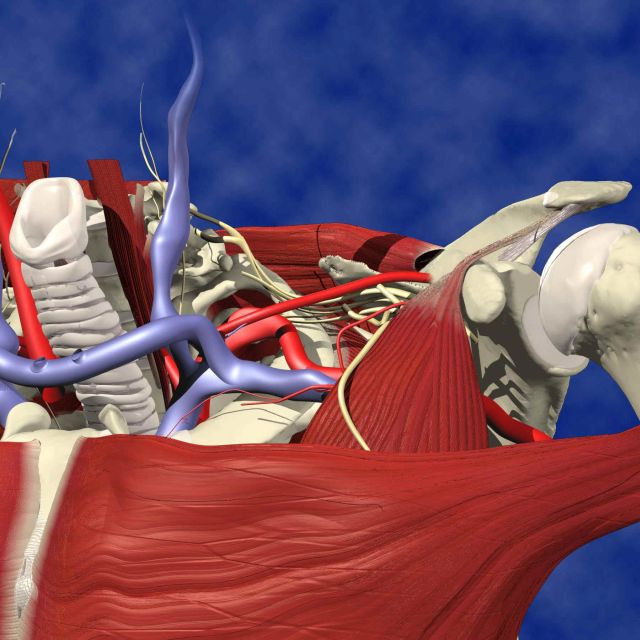 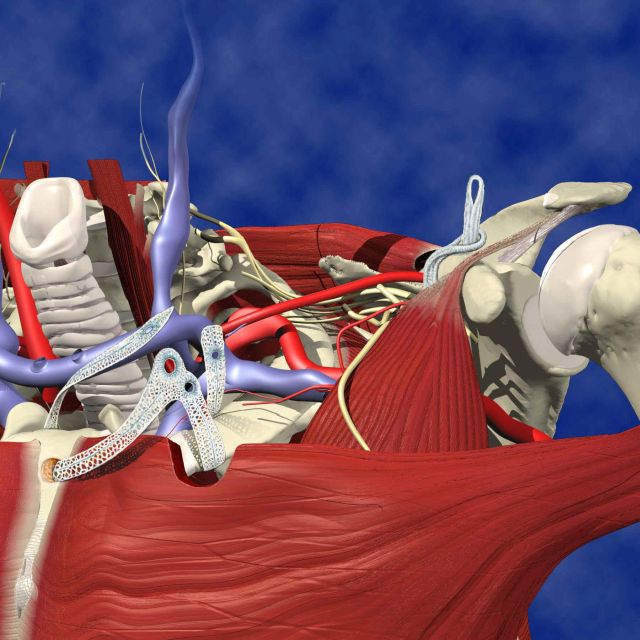 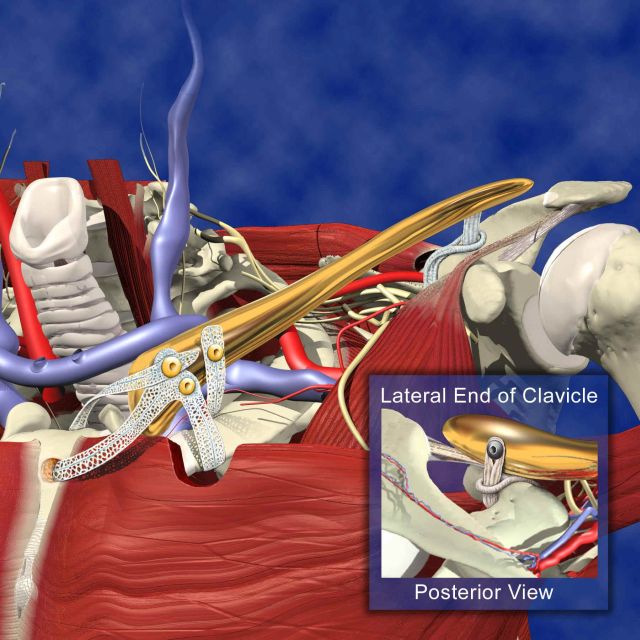 In the development of endoprostheses, anatomical data plays an important role for the design and dimensioning of the implant. As Tim’s left clavicle had been previously excised it was planned to use the CT scan data from his right clavicle. This data was converted and transferred into a CAD system, where it was mirror imaged to produce the geometry of the proposed left clavicle.

With the design finalised the CAD model was then positioned into its anatomical position within the scan reconstruction, to check alignment and fit.

Titanium alloy was chosen for the implant, with a titanium nitride coating to improve wear resistance and help prevent tissue staining. All Biomet Merck implants are manufactured from proven materials and are fully content traceable and meet all relevant British, European and American standards.

Working closely with the engineers from Ellis Developments the design was finalised, and a wax model of the proposed clavicle prosthesis was sent to Professor Wallace for his approval.

For a video of the procedure, click here.     (This file may take a very long time to load)

Based in the West Midlands, Surgicraft was founded in 1924 and has a long and successful history of launching leading-edge medical devices. Surgicraft has developed a range of products across all of its main business areas, including the development and launch of the Surgilig in conjunction with Professor Angus Wallace and Mr Lars Neumann of the Nottingham Shoulder and Elbow Unit. The company also has a number of other products which are currently being launched in the UK and world-wide markets.

The Surgilig is a purpose-made artificial ligament designed to stabilise the collar bone following a severe dislocation. It secures the collar bone in place and is fixed with a stainless steel bone screw.

Surgilig utilises Surgicraft’s proprietary material technology to provide a strong biocompatible fixation that develops good tissue in-growth. It has been used nation-wide for the last three years in both NHS and private hospitals.The company has a considerable track record of developing innovative, leading-edge products for a number of diverse healthcare sectors and is currently finalising a private equity fundraising project to support the launch of its latest innovative shoulder product across Europe and other key export markets.

The technology to make the implant is a development from commercial embroidery techniques. The design is drawn up in Nottingham on a standard drawing package on the computer, the design transferred to a commercial embroidery design software package and the computer-based design programme prepared. The design is then e-mailed to Pearsalls in Somerset, where manufacturing can start, if necessary, within minutes.

The embroidery is carried out in a clean room using suture thread on a soluble cloth. Superimposed layers in the design ensure that the implant is strong and stable when the cloth is dissolved. The implant is sent for sterilisation by gamma irradiation and then despatched to the surgeon. 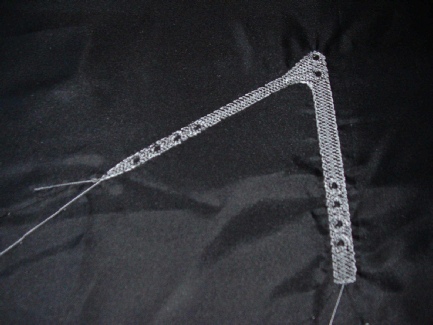 Professor W Angus Wallace was appointed Professor of Orthopaedic and Accident Surgery at the University of Nottingham in 1985. He is Consultant Orthopaedic Surgeon to Nottingham City Hospital and the Queen's Medical Centre and also Honorary Consultant to the Portland Training College for the Disabled in Nottinghamshire.

He has particular interests in shoulder and elbow surgery, biomechanics and passenger safety in transport accidents, sports medicine, medical informatics, osteoporosis and new methods of providing healthcare within the NHS.

Professor Wallace has been directly involved with the following innovations in the field of shoulder and elbow surgery:

-   The Nottingham Hood for use with shoulder replacements (Ellis Developments & Pearsalls)

Professor Wallace holds many senior positions in shoulder and elbow surgery and biomechanics in the UK and worldwide, including President of the British Elbow and Shoulder Society and Co-Chair of the Research and Training Advisory Group, Medical Devices Faraday Partnership. He has received awards and prizes for his achievements in medicine and is a prolific writer and lecturer on orthopaedics.

Julian Ellis or Michelle Rae will be delighted to hear from you.

Tim Baggaley is a freelance journalist, editor and designer with a career largely in magazine publishing and web design. Since his accident he has been developing a new career as an amputee actor after he was ‘discovered’ by a casting director at his weekly dance class. He secured a part in the current BBC 1 Saturday night horror series’ Strange’ as the demon ‘Kaa-Jinn’ and this has led to other opportunities, such as a new film ‘Shaun of the Dead’ when he plays a character which turns into a zombie and gets his arm chewed off. Tim is a keen motorsport fan, building motorcycles and preparing professional bike and car pit crews for races. He swims, fences and plays badminton and is an enthusiastic ballroom and Latin dancer - something he would like to go on to teach. He also enjoys theatre, play-reading and writing for pleasure. He writes poetry and gives recitals of his own work. More details about Tim and his career can be found on his website: www.timbaggaley.com

For the BBC News report on this operation click here